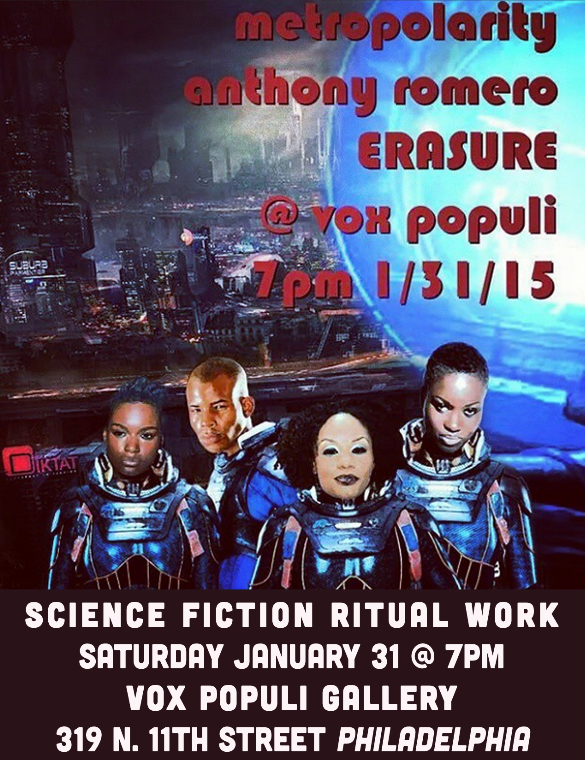 We are honored to have Metropolarity join us for an evening of sci-fi dreaming, scheming, and reading.

Ras Masramani
**a vessel, a vast and veiny husk calcified in the rigorous vacuum of space, pulverized into turbid canals that pulsed star juice through galaxies, lands on a reef or at the obfuscated gate of a casino or social security office or the alien terrain of near africa.

Alex Smith
**mythmaker with sudden sentience, emerges from the proud licks of the swamp, brandishing sick sigils and taking flight, the leaked last light of the lamp of the universe, a goddess in kevlar and neoprene, strafing the skies and embedded in our god pining hearts, in the stratosphere
http://theafterv3rse.tumblr.com/

On January 31, 2015, Metropolarity, a mercurial band of radical sci-fi architects and tantric electroglpyhs, together, with Anthony Romero, avant-activist and advanced idea technopilot, embarked on a mystical journey through time, space, and the biosphere to retrieve the stolen memories, the lost idea spark of the known universe. Because they lived in times where the voice of the oppressed (queer black and brown bodies; don’t trip) was muffled, cataloged and ultimately erased, where their lives were scrutinized, their skin and bodies criminalized and made alien, where their stories, long forgotten, were stolen and then retold and repackaged by interlopers, then sold back to them under the well-worn veil of diversity hashtags, the cosmonauts of Metropolarity geared up on a mission to shift the paradigm of their world, not to change it, but to right it’s course.

This is what happened. This is ERASURE.