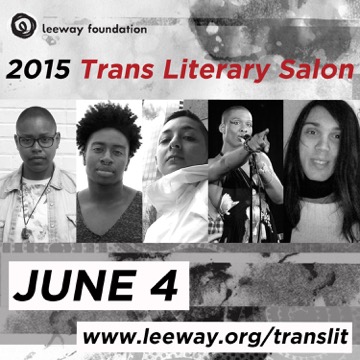 In conjunction with the 2015 Philadelphia Trans Health Conference, Leeway presents the Third Annual Trans Literary Salon highlighting the work of emerging literary artists from a diversity of genres including poetry, fiction, memoir, and spoken word. At the Philadelphia Convention Center,  June 4 from 7:30pm – 9:30pm.

Special thanks to the Philadelphia Trans Health Conference

Cyree Jarelle Johnson is a Black non-binary essayist and poet living and working in Philadelphia, PA. Their writing considers disability as a cyborg femme reality, femininity as resistance and rebellion, and Black pessimism. They are a founding member of A Collective Apparition, a Black queer and trans interdisciplinary arts collective. Their work has been featured in publications both domestically and internationally including Black Girl Dangerous, Feministing, and most recently in the anthology Poems for the Queer Revolution.

Kavindu Ade
Kavindu Ade is a 24 year old Wordsmith, Jedi, and Black Boy Extraordinaire. Born in Brooklyn, NY to Afro-Caribbean immigrants his poetry is a dance between cultures. While best known for his gender identity poem entitled “IT,” Kavi’s work centers on his navigation of intersecting identities – among those, the relation of his Blackness to his transcendence of gender. Through his poetry the world unfolds itself into moments of cruelty, but also beauty, wonder, and becoming. Kavi has been performing since 2009 when he made his debut into the spoken word scene at Brave New Voices International Youth Poetry Slam. After two consecutive years competing on the international stage Kavi went on to coach the Philly Youth Poetry Slam Team that competes at BNV. He is also the coach of Temple University’s Slam Team. Kavi has performed at conferences from Vancouver, Washington to Saint Paul, Minnesota, and has had the pleasure of gracing the stage at Grinnell College, Rutgers University, Ursinus College, and Clark University among others. Off stage, he is probably in his room enjoying a good bowl of cereal, binge watching detective shows, or posting his best attempts at immaculate selfies.

Lady Dane Figueroa Edidi
An actor, singer, dancer and writer she began producing her own cabarets at the age of seventeen and made her New York cabaret Debut at Don’t Tell Mama’s in 2011. After beginning to study the Dances of her Ancestors at Mamasita Studio, she began combining African, Latin and Native American rhythms to her shows. Although primarily known for her explosive style of cabaret, Lady Dane is a passionate actor who has worked at such theaters as the Kennedy Center, Adventure Theater, Round House Theater, Theater for the New City, Spooky Action Theater, Arena Stage, and LaMama in New York in which she originated the role of Madame Cordelia Mcclain. She has also produced a reading of her new musical Roaring, and premiered a workshop of her one woman show Klytmnestra at SpookyAction Theatre. A Poet, and advocate for Trans Voices in the arts she became the first Trans Woman of Color in DC published author of a work of fiction, Yemaya’s Daughters.

Maggie Eighteen
A hybrid kid cyborg, Philadelphia native, and former girl-object prototype. Eighteen is frustrated/pissed with academic distinction, white supremacy, and fixed rather than fluid treatment of language and identity. A co-founder of Metropolarity sci-fi collective, they enjoy slang/dialects, brand confusion, bushido Mars death stuff, and nuance. When they are not working professionally in critical media literacy and empowerment areas, they write speculative fiction about bodies/objectification, intimacy/class, neighborhood/community, and the violence in relying on binaries to understand the world.

Tyler Vile
Tyler Vile is a poet, performer, and activist from Baltimore, Maryland whose work has been published in Gadfly, The Bicycle Review, and Bluestockings Magazine. She’s done reviews and interviews for Punk Globe Magazine since 2007, has spotlighted at Sparkle, DC’s monthly queer open mic series, and slammed at Capturing Fire, DC’s annual queer spoken word festival. Her full-length book of poetry, Never Coming Home, is forthcoming on Topside Press.