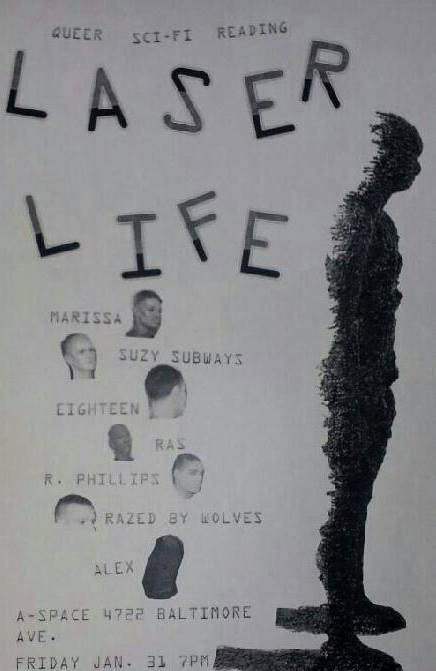 For 100 years, LASER LIFE has provided the denizens of the hollowed out, Siberian dystopic husk formerly known as West Philly, with the one and secret voice. Fashioning antennaes from bones of dead CEOs and the rotting the planks of the Comcast building onto abandoned warehouses and hipster enclaves, it’s ever revolving cast of miscreants and saboteurs have been broadcasting the last zombie drenched signal of hope out into the universe. They are all just the strange fags and three-eyed queers caught stealing fruit and guns at the intergalactic bazaar, stowing away on the Millennium Falcon, and photo-bombing the white washed sardonic landscapes of even the most triumphant Capt. Kirks in victory pose. We’ve found them. This is their Santeria, this is their church.

Marissa Johnson-Valenzuela— the weaver
the curator for the still untitled literary salon, Johnson-Valenzuela has created stark, unflinching habitats where we all clatter and bang, brushing our empty tin cans against the rusting steel bars of life.
*powers and abilities: Dream weaving, mind control

and the Metropolarity crew…