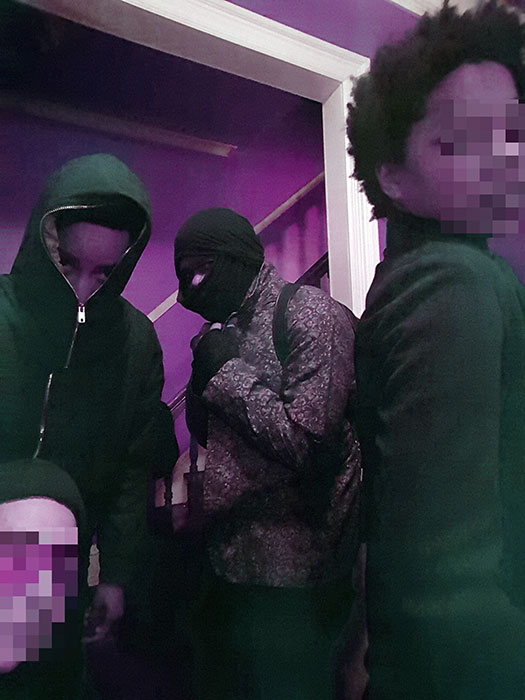 Ras Cutlass is a Philly-based sci-fi writer and co-founder of Metropolarity, a local sci-fi collective that centers the speculative work of Black, brown, queer, ill, neurodiverse, poor, and working class people. Her work concerns the experiences of people who are subject to institutionalization and dehumanization. In another life she is a social worker focusing on youth homelessness and community-driven healing. Her work can be found in Metropolarity’s debut collection, Style of Attack Report, >Pank, and in a forthcoming paranoia thriller about Black bodies and the [mental] healthcare industry.

Alex Smith lives in the seams in the cloth of existence where he desperately stitches together universes with one hand and with the other, armed with an espresso tamp, makes valiant attempts to keep his lights on.

A member of the sci-fi artist/activist collective Metropolarity, founder of the queer sci-fi reading series Laser Life, and curator of the retro-futurist electro mash-up art-jam Chrome City, Alex’s stories and writings embolden the weird, strange, and revolutionary dichotomy of being Black and queer in a world that marginalizes both.

Selected by Rosarium Publishing for Stories for Chip an anthology dedicated to the writing of Samuel Delany, and for Black Quantum Futurism’s Space-Time Collapse: From the Congo to the Carolinas, it’s Smith’s flash fiction collection Gang Stalk Oprah, self-published sci-fi zine A R K D U S T and super-hero space opera comic book BELIEVERS that will kidnap you, convert you, shoot you in the leg and then set you free.

M Téllez is a crossroads cyborg who writes and performs speculative tales about desolation/intimacy, class/objectification, borders/land-based memory/media control, and the violence in relying on binaries to order the world. They are a white mixed race person from a working class blended family, and born and raised by the city of Philadelphia*. M is frustrated/pissed with institutional legitimacy/charity, anti-blackness by white assimilation, and fixed treatments of language and perspective. They serve as Minister of Crossroads and founding member of METROPOLARITY. They consider the common word a handy and inexpensive tool for deconstructing oppressive world-ordering narratives.

M is a Leeway Foundation 2014 Art & Change grantee and 2015 Transformation Award recipient. They are one of METROPOLARITY’s co-editors and a compulsive self-publisher. M’s short stories appear in several Lambda Literary Award nominated anthologies. They have guest lectured, performed, and facilitated workshops at The Free Library of Philadelphia, Swarthmore College, Allied Media Conference, Drexel University, Philadelphia Institute of Contemporary Art, Rutgers University, Haverford College, The New School, Moogfest, and others. They have performed on live radio, in front of crowds in basements, autonomous spaces, professionally mic’d stages, galleries, and community centers. M is knee deep in working on a ‘book’.

Rasheedah Phillips is the Managing Attorney of the Landlord-Tenant Housing Unit at Community Legal Services of Philadelphia. She is a recent recipient of the National Housing Law Project 2017 Housing Justice Award, 2017 City & State Pennsylvania 40 under 40 Rising Star award, the 2018 Temple University Law School BlackLaw Student Association Award, and a 2017 Pew Fellowship co-recipient, and is a 2018 Atlantic Fellow for Racial Equity. Rasheedah’s writing has appeared in Keywords for Radicals: The Contested Vocabulary of Late Capitalist Struggle, Temple University Political and Civil Rights Journal, Villanova Law Review, Organize Your Own Catalogue, and many other publications. Rasheedah is the founder of AfroFuturist Affair, Black Quantum Futurism Collective collective, a founding member of METROPOLARITY Queer Scifi Collective, and a self-published speculative fiction author of multiple books. She is also the co-creator of the award-winning Community Futures Lab project, a socially engaged art project utilizing themes of communal temporality, futurism, and preservation of memory and history in an area undergoing redevelopment, gentrification, and mass displacement.