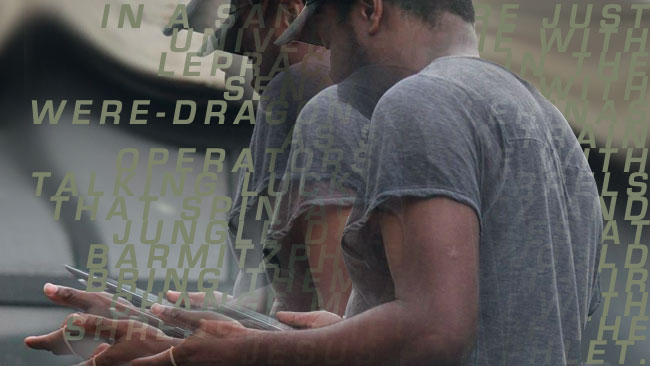 In Which Afro-Barista Dreams of a White Dwarf Star

The following was performed at the 3rd annual ROCKERS BBQ weekend. Consider it a part of our episode, the SPACE INVADERS :: Gentrification x Community issue of our Journal of Speculative Vision & Critical Liberation Technologies. Video by Kaos Blac. Feature image by House of Hayes.

So, I opened a customer’s check book, and inside, there was a pamphlet about god. My boyfriend had visited me at work, kissed me on the cheek and dashed off to an adventure on his own. It made my day. I think the three-top sitting at D4 saw this. After I dropped the food at their table, they asked me to pray with them. I declined. Fortunately, as the note they’d written on their check said, “God cares. Even for sinners such as you” . In a saner, more just universe (one with leprechauns in the Senate, one with were-dragon ballerinas as Septa train operators, one with talking lucky squirrels that spin acid jazz and jungle dub plates at barmitzphas), I would bring them back their change mixed in with shredded pieces of the Jesus pamphlet. I’d leave them a note as well. This is what it would say:

“The grid shapes us, molds us, makes us uniformly square. The binary assault on our senses has dulled us. We are trapped, thinking that our sexuality stems from some kind of intrinsic pre-determined genetic code, or that it can even be unlearned. We are all existing on levels of love, on a cosmic string that stretches across and over galaxies like electrical wires. When I lay down and kiss my boyfriend at night, I’m crossing the streams of countless eons of information, of pre-cybernetic memory, the ancient kind of memory that tells me that “I exist”. So, no matter what you write *now* on this little receipt, I’m giving you, in return, a sort of inter-dimensional banjee girl effect. I am kissing your son and husband passionately, deeply on the mouth, even now, just by writing this. I do appreciate your prayers, because I recognize that it is essential to humanity to create stories and dreams that explain the science of the world, that reassures us of our place, even as granular as it is, within the multiverse, but I also recognize that just as essential is our notion to be connected in grander ways to each other, that our holes are there for traversal and transmission and communication, and that we are portals, always and forever. So, yes, I am eternally in need of God, but only so much that god is creation and sex and fervor and life.“

(And yes, I could write all of this in-between serving customers and waiting on my other tables; sure, i’m *that* good. Plus, I keep a cache of “verbal beat down” tucked into my brain for just such occasions so it was all a matter of channeling, really)

Even in this reality, where ever “this reality” currently is, where we danced on top of DHL trucks at bonfires. Where we filled our baskets with the cosmic dawn, with the tools of the culling, marched over the horizon and struck a blow at the sun. Even here we are flying things, vast and unicorn, radiating in free effervescent thought chroma, bursts of the burgeoning universe lilting over radiant nebula, cloud and ash. We are baristas and shamans at the desks of the apparitions, the waitstaff in white gloves on the yachts of freedom ghosts with our time cards stamped until eternity.

My hands are gold and steel, wrapped up time machines. I push the button and black goo pours out in delicious crema. I stare at it as it coalesces into a filthy golden ring, a soul sapping halo of procured anti-vitamins, a sun-sucking ember extracted from a plant three thousand miles, one hundred leather straps on the back, an ocean of dead black bodies buried at sea, away. And then I pour it into the cup.

“Hello?” The pregnant white woman is holding her purse, her lips curled up in a half crescent of desire and thirst. She sees my black skin first, ignores the beading droplets of sweat coagulating on my brow. I think of the nights where we set fire to a rib shack, where we etched “death to gentrifiers” on the windows of the newest Wendy’s on Lancaster avenue, where we pricked our ankles on barbed wire and left bloody DNA tattoos on the walls of art museums. I think of the night sky opening up, afterglow sparking, ebullient rush of the wind, the party doors swinging wide and androgynous avatars announcing to the world, this is the land of the freaks and warriors and we’re taking things back, we’re busting out, we’re clearing this world, swollen on the fruit, still starved for the meat.

I wrote so many things down in those days, on the back of Spider-Man comic books, on napkins and napkin holders, on pieces of trash stuck and corroding on the side of the curb. I wrote of taking the artifacts out of the glass cases and putting them back into the ground- the sacred ground. I wrote of the ground.

“I’ll be with you in a moment,” I say, as I stir the pure brown down into the creamy liquid mass of the white white milk. Ah, an easy metaphor, I think, a clear and beautiful piece of hyperbole, consisting of the life blood of yuppiedom. I can set this thing on the counter, watch its pale beige swirl inundate the glass, cascade over the clear, nameless, not-there ice cubes, as it turns into the perfect mix of the people of the planet, of the people of Philadelphia, this great city of love, of understanding.

But this isn’t an 11th grade essay or a melting pot narrative. I’m standing behind a counter with a uniform on, the blackest beacon in a white universe, easily Google-able, so simple it is to Yelp my non- name: the star artist in this cappuccino and iced americano crazed continuum is ______. You can type my form into the entry for the café, it’s simple, and they will know who you are talking about. It’s not like we’re standing in a bodega in South Philadelphia or a five and dime in Kensington or a donut shop under the L at Girard. We’re here where the encroaching horizon of academia clashes with the shrinking border of hunger and death pangs. It’s real simple: I’m the black guy that works there.

“Are you ready for me?” she asks, as I stand staring her into her crisp blue eyes. She held her smart phone, tethered to her hand like a cyborg arm connected with nano machines. I could not tell where she ended and the iPhone began.

She is not ready to order. She is just there.

And so they all list into being, like a star-studded wikipage unraveling, falling into life and birthed in a line. They all want something from me, every inch of my black body, all that I can muster for them. They want everything except my story. A cop. A minister. A priest. A man in a Duke Lacrosse t shirt. An elderly woman with a tripod cane. A seeing eye dog. A boy in ripped jeans with a handlebar mustache. Another cop. A man with a souvenir paint brush from Milan. A woman wearing a dress made of kente cloth. A punk rocker.

I sat on the stoop outside of the café, watching children play in a puddle, the water rising and falling with their every excited splash. A police car came tearing through the intersection, slowed down when it passed the kids, rolled it’s window down. A white man in the back seat peered out plaintively, shook his head at the children then mouthed something to the cop driving and the squad car sped on.

When I’m emptying the trash, I am still a super-hero flying through the air, talking to dwarf stars and dreaming in quasars. When I’m picking up used napkins off of tables, I’m still a griot mystic, weaving light constructs from tiny threads of reality. When I’m making your coffee…

I saw the pregnant white woman on the 34 trolley. She got on at 36th street. I could feel the air sucked out of of the car from the vacuum created by the many men and women rising to give up their seat. I felt the searing heat of x-ray eyes, as the air got thinner, hotter, at 40th street station, where a black woman with three kids, weighed down with grocery bags got on. The look of disdain from the same passengers was hot enough to bake vampire flesh. I kept reading my comic book, stitched into my aisle seat.

When we reached 48th street, the sea of color had dispersed. The swirling yellow and porcelain white, the garish garments and cargo pants and Birkenstocks had disappeared. The announcer stopped announcing the street numbers. There was just us: monolithic, vast, black, and unicorn.