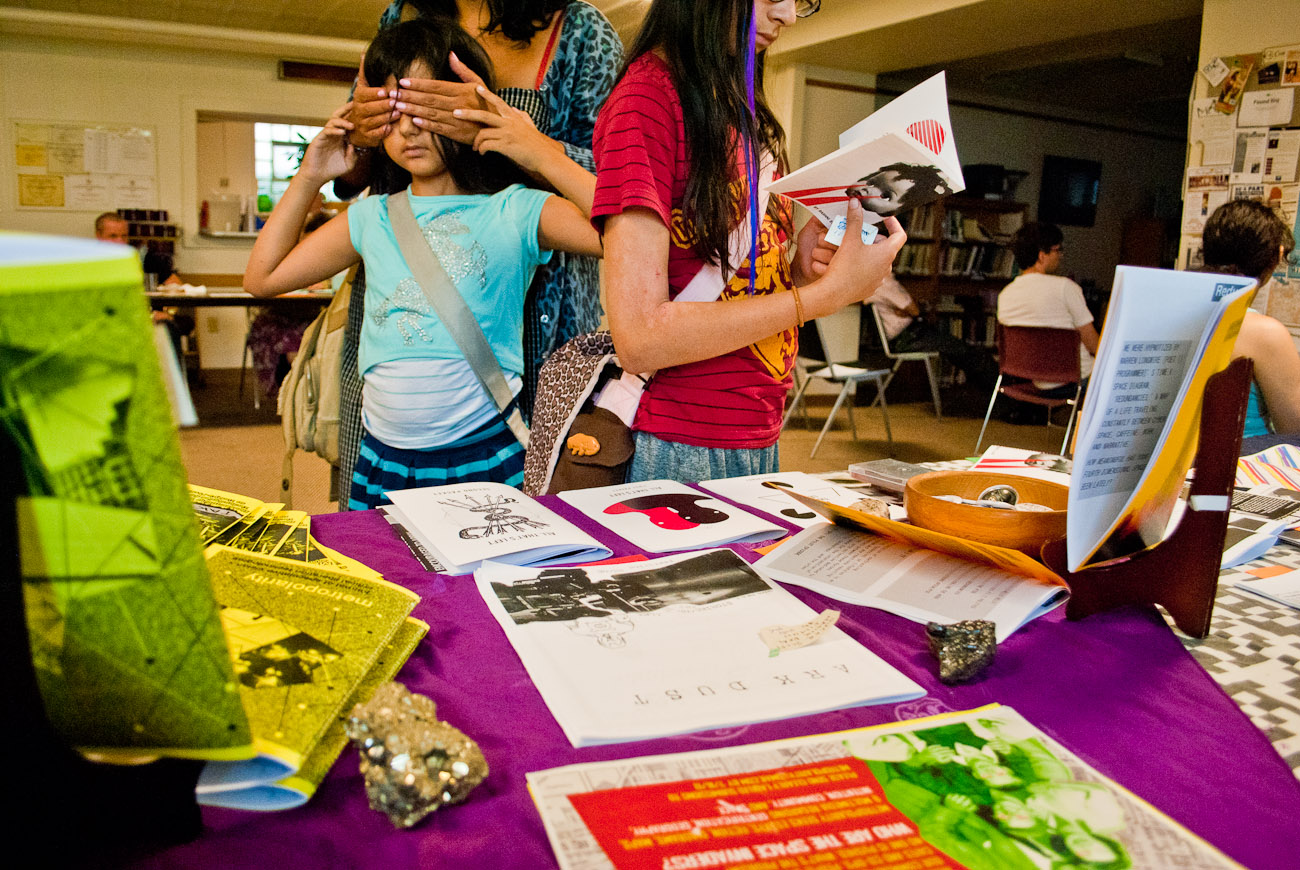 WE’RE FROM THE CITY, WE LIVE ON THE EAST COAST.
WE RECEIVE AN ELECTRONIC REQUEST FOR DISPATCH TO THE MIDWEST
THE FARGO MOORHEAD ZINE FEST?
HAVE ANY OF Y’ALL EVER BEEN TO FARGO BEFORE?
FARGO, NORTH DAKOTA?

Yes, Fargo, North Dakota. To those of us who grew up in those big coastal cities (Philly and LA in our case), Fargo opens up as a charming city—the largest city—in North Dakota, right across the street (or creek or train tracks) from Moorhead, Minnesota and the buffalo plains of the midwest. Downtown Fargo was full of cute cafes, independent boutiques, hip eateries, hip churches, a comic book store, a record shop, a tattoo parlor, an awesome public library, and a strong bicycle culture to boot. We were surprised, when originally Ras was worried about being “a black” in the midwest and I was worried about having to deal with the class rage of interacting with happy-go-lucky privileged white people at every turn. It did indeed seem like an attractive place where a nice sense of chummy and shallow “diversity” can flaunt itself proudly without ever having to be accountable to people who aren’t white, middle class, straight, or men.

But then there’s Joyce Hatton and the Fargo Moorhead Zine Fest (FMZF).

After I made my first (intentional) zine well, I thought ‘well, what now? Zines are for white punks, so there’s no community for me to share this with.’ And then I found POCZP [the People of Color Zine Project]! I totally fell in love with the online community, and thought ‘wouldn’t it be great if I could have this kind of safe, supportive, openminded community in my physical space, too?’

I decided a zine fest was the way to go, so I started making that happen. I had no idea how to do it, but I just started taking steps that seemed to make sense. My idea of zines being for white people didn’t just happen, it grew out of misinformation about zines, and zine fests that weren’t diverse, so I thought really hard about what I wanted for FMZF.

The goal was that FMZF be a diverse event, meaning: people of many different races, ethnicities, cultures, religions, genders, sexuality, and classes have knowledge of the event, feel comfortable attending FMZF, and have had an opportunity to make a zine prior to and/or during the event so that each person feels zines are accessible to them and therefore feel included.
My goals for working with POCZP are to:

1) to build community in Fargo-Moorhead, share POC zines, and create safe spaces for POC and allies to have an honest, open sharing of ideas and experiences.

2) find ways effectively and easily share the POCZP’s mission and zine making with physically, emotionally, or ideologically isolated POC in rural areas and small towns in the Midwest.

So the work of FMZF fits in perfectly with that! And the reason those are my goals is because that’s what I want in my own life, and wished that I’d had when I was younger. I think that helps me to be effective and passionate because I’m truly working to fulfill needs lacking in my own life. All workshops and activities have been free and open to children because I’m also very passionate about using zines to validate and empower children.

The idea of me having a POC-led event talking about ways we can empower ourselves and each other was terrifying to me at first, due to a mix of safety concerns, internalized racism, and who knows what else. But with the help of Daniela Capistrano, the founder of the POC Zine Project, I found the courage to do it! And many thanks to Metropolarity! It was awesome getting to know Eighteen and Ras. They really helped make FMZF wonderful!

Fliers were all over the Fargo-Moorhead area, there was a write-up in the local alt weekly, the High Plains Reader, and there had been a number of small workshops leading up to the fest itself. Come Saturday, we found ourselves setting up in the basement of a Unitarian church, wondering who and what was to come. Aside from the tablers, there were to be performances and workshops by Spring Ma, Unedited Media, Quese IMC, and a screening of REZ by director Dominique DeLeon followed by a Q&A. That plus our own workshop on the particular way our humble science fiction collective has manifested movement building through speculative imagination. Joyce had gone to great lengths to bring together a lot of excellent crews under one roof…

It was a humble space with modest attendance, and perhaps you cannot tell from these words and images, but a deep and important well of life-sustaining exchange was discovered that day. Trust.

Young Spring Ma brought her dad and her guzheng and lent a mindful ambiance to the day, performing three sets in her most excellent princess attire.

Rad librarian Becca with her own zines, in part with the MSUM Women’s Center.

Burrow and the Don’t Dis My Ability collaboration zine she put together, which came in a large print format as well.

Unedited Media spoke about their formation as a collective during Occupy Wall Street and their introduction to media documentation and representation. They shared how they ended up in the midwest, documenting resistance events (against struggles primarily affecting native communities which the rest of the country would otherwise think was ancient history), and how they make media respecting the people involved in a given struggle, not simply just vying for the most shockworthy or attractive shot.

Sept 2nd, 2013 Blockade of Illegal Activity in White Clay. from Uneditedmedia on Vimeo.

The feminist librarian crew of the Women’s Center of Minnesota State University Moorhead repped with a zine library and open, intersectional mindsets. We heard quite a few of their anecdotes that made clear “feminist” is still a very dirty word out that way. Their binders full of zines were really worth going through…

and this highly #relevant gem from the 90s

Joyce with her excellent zines on overcoming cancer, seeking sobriety, safety, strength, dignity, and community. And the illustrations! Did you know? She’s the midwest coordinator for the POC Zine Project. 😀

Spring Ma’s formidable cuteness displayed itself on all levels

The fest was a kid/family friendly event, so we brought a few things just for them and covered up any cuss words they don’t need to be knowing just yet.

We brought along work from Suzy Subways, Annie Mok, Patrokolos, and other neighbors that had print materials to send along.

You can get our zines here and here, by the way. 🙂

Starting the workshop with ‘what do we think of when we hear the word sci-fi?’

Quese IMC and Joyce discussing intentions for the Quantum Time Capsule mini workshop we held (which we personally experienced firsthand at the Rockers BBQ thanks to our boo, the AfroFuturist Affair).

Quese IMC came and made a circle and one could say that he spoke of the undeniable history of violence against native people, against peoples, and cycles of violence, cycles of learning. One could also say that he came to be heard and came to hear us, and in the circle there was humility, and in humility, paths to healing. I would later write that he gave us some medicine.

Marcus “Quese IMC” Frejo is an award winning indigenous hiphop artist. His music has been in film and animation, both major and independent. He has performed with the likes of Run DMC, Ludacris, Knarles Barkley, Atmosphere, The Pharcyde, Kumbia Kings, DJ Grandmasterflash, Petey Pablo, Clipse, Poor Righteous Teachers, Mos Def and Tinariwen, just to name a few. Quese IMC is one of the founding members of the world-famous group, Culture Shock Camp. He truly loves the artform of hip-hop expression and uses this instrument to bring forth awareness, consciousness and change within people and communities, not by force but by invitation. This invite consists of building bridges with the people and aligning ones ideas and spirit so that true spiritual change can be moved about through the power of word, music, art and connection.

Quese IMC was born in Oklahoma and is from the Wolf band of Pawnee and Bear clan of Seminole Indigenous People. He also has roots from Silao, Guanajuato. Quese IMC has been writing, performing hiphop since the age of 7. He continues to work with and within indigenous communities across the country, as well as inner-city youth programs, high schools, universities, youth conferences, multi-cultural impact building and cultural exchanges. Quese IMC also works with programs geared towards suicide prevention on and off reservation communities.

The zine fest officially ended at 5pm and shifted to a screening of Dominique DeLeon’s short film and graduate thesis at NYU, REZ, “a film meant to honor a late friend but also shed some light on the plight of the 7th generation.” [more]

Daniel Nightbird is an Ojibwe teen living on the Leech Lake reservation who’s taking care of his young sister alone. Down to his last dollar, when he’s suddenly evicted it sets in motion a desperate search for a safe place on the Rez, which is harder to come by than even he imagined.

Apparently, his board of reviewers did not quite believe that native peoples living on a reservation might dress in certain attires, act in certain ways, or experience certain struggles, and questioned the legitimacy of the narrative as depicted in the film. Upon sharing this anecdote with the lot of us, we all scoffed and shook our heads. Is it really so difficult to believe that struggle out of oppression needs to look a certain way for it to be real? You could say this is exactly why events like FMZF need to take place.

The screening closed with a Q&A with DeLeon, as well as REZ’s lead actor, Al Seaboy. When I asked what kinds of films he wants to be in going forward, he said he wanted to be in works about real people, real stories, like REZ.

And in the quiet of the early evening, we packed up, said our farewells, and started to make our post-fest dinner plans.

Being in Fargo and meeting with the people at the zine fest gave me a lot of much-needed perspective. Being raised in a mixed, blue collar family and living in a city like Philly, it’s always been easy for me personally to run my mouth against people who come from financial privilege, white middle Amerikkka, the liberal white middle class, oblivious whiteness, period. So it was humbling to interact with a white community that is surrounded by nothing but white supremacist culture & unquestioned colonialist narratives, yet are somehow able to see that there is a problem with it (by listening to the people saying THERE IS A PROBLEM!) and working to change their attitudes, perspectives, and power structures for oppressed people out that way. Respect. This is to say nothing of the awe and uplifting, sustaining feelings I had to be around Joyce and the fruits of her labor in creating something out of nothing — an intersection point for people of color, a place for sharing, listening, visibility, and empowerment.

Later I wrote in my journal, “Quese said that his jewelry wasn’t his. He just carried it with him, and it became a part of him over time. And later it would go on to be a part of someone else. Exchange of information. New contexts. New meanings. New stories. New worlds. Thanks, Fargo. Thanks, Joyce.”

If you’re in the Fargo-Moorhead area and want to get hooked up with a solid crew, why not introduce yourself to the FMZF Auxiliary Programs squad?

See the entire photoset from our trip to Fargo here.