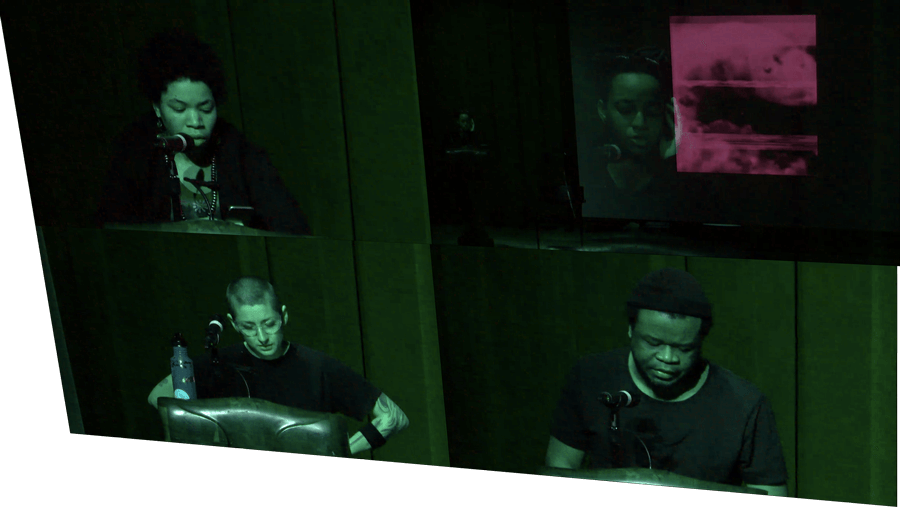 “SCI-FI AS MEMOIR IN THE REALITY OF APOCALYPSE”

(1) #SOFTTARGETS WAS A DAY OF WRITING CRITIQUES + WORKSHOPS + PERFORMANCES ON A SATURDAY AFTERNOON AT THE PHILADELPHIA FREE LIBRARY CENTRAL BRANCH.

This was an day-long event held in preparation for the submission deadline to APIARY Magazine’s 8th issue and collaboration with our collective, themed SOFT TARGETS. APIARY is a volunteer-run, freely distributed literary magazine based in and featuring Philadelphia writers. Before METROPOLARITY got started, Ras was one of the fiction editors for the mag. APIARY’s staff has always supported us, and we’ve been meaning to do some sort of collaborative effort ever since. So the SOFT TARGETS issue is a sci-fi one collaboratively edited by us at METROPOLARITY, along with the standing editors at APIARY.

THE DAY CONCLUDED WITH METROPOLARITY SQUAD READING IN THE MAIN BRANCH’S FAMOUS AUDITORIUM. IF YOU MISSED IT, THANK THE COSMOS FOR A LIVESTREAM, M I RITE???? AUDIO IS PROVIDED BY NYFOLT & MOOR MOTHER GODDESS/BLACK QUANTUM FUTURISM CREW

Eighteen says: It was sooooooooooo nice to be at the central branch of the library for this event, and super starry to perform in the famed auditorium. Like a lot of Philadelphians out there, I spent a looot of time in the library growing up (Olney & East Oak Lane branches whut up). Really grateful to APIARY staff and Adam from the Library for making things possible, and very appreciative of everyone who came out to the writing critique session and workshop, and all those who stayed for the performances.

THANKS TO ALL WHO CAME. THANKS TO JOYCE HATTON FOR THE MOST EXCELLENT DEBUT, MOOR MOTHER GODDESS FOR THE STORM, CHASKA FOR THE PERFECT AUDIO/VISUAL ATMOSPHERE & EVERYONE WHO CAME OUT <3 <3 <3 <3 IF YOU ARE INTERESTED IN READING/PERFORMING AT THE NEXT LASER LIFE, CONTACT THEYAREBIRDS AT GEEEEEMAIL.

What nobody seems to have pics of is the powerful trailer for M. Asli Dukan‘s INVISIBLE UNIVERSE documentary on black speculative fiction… but check this out:

In 2003, independent filmmaker, M. Asli Dukan, set out to make a documentary about the 150 year history of Black creators in speculative fiction (SF) books and movies. What she didn’t realize at the time was that she was about to document a major movement in the history of speculative fiction. A movement where a growing number of Black creators were becoming an effective force, creating works that had increasing influence on the traditionally, straight, white, cis-male dominated SF industry. However, while these Black creators imagined better futures for Black people within their fictional works of SF, in reality, the everyday, lived experiences of Black people in the United States – e.g., the rise of massive inequality, the prison industrial complex, and police brutality – stood in stark contrast. She began to wonder if these phenomena were related.

Told through the ever-present lens and off-screen narrator voice of the filmmaker, Invisible Universe will explore this question by examining the work of Black creators of SF through the ideology of the emerging Black Lives Matter movement, which addresses the systematic oppression of Black lives. Since she began the documentary, the filmmaker has compiled an extensive interviewee list of Black writers, artists and filmmakers of SF who have been creating works where Black people not only exist in the future, but are powerful shapers of their own realities, whether in magical lands, dystopian settings, or on distant worlds. In addition, she has documented an ever-increasing number of academic, community and arts events dedicated to the work and critical analysis of Black SF, as well as building connections between the creators, thinkers, organizers and fans. In the past decade, the filmmaker has documented the cultural shift around Black SF and its explicit connections to Black liberation. This documentary explores the idea that in a world of capitalist exploitation, anti-Black oppression and state violence, Black creators are speculating about better worlds as a means of resistance and survival.

The documentary will also consider how “Black Speculation” is rooted in the history of “Black Struggle” in the United States by exploring two previous eras of Black creators speculating about Black lives through the genres of SF. The first era occurred during the nadir of African American history in late 19th and early 20th centuries, when slavery, war, lynchings, race riots, disfranchisement and segregation inspired Black writers to pen narratives about international slave rebellions, secret, Black governments and powerful, long lost, African kingdoms. The second era occurred during the 1960’s and early 1970’s, when the work of Black writers of SF seemed to extrapolate on the possible futures that would occur as a result of the successes or failures of the Civil Rights or Black Power struggles. This documentary will explore how this current moment, which the filmmaker considers the third era of Black Speculation, compares and contrasts with the earlier two eras.

This timely documentary includes interviews with Black writers of SF like Samuel R. Delany, the late Octavia E. Butler, Steven Barnes, Tananarive Due, Nalo Hopkinson and Nnedi Okorafor, actors like Nichelle Nichols and Wesley Snipes, cultural organizers like Rasheedah Phillips and her AfroFuturist Affair, academics/artists like John Jennings and Nettrice Gaskins, social justice workers/artists like adrienne maree brown and Walidah Imarisha, as well as numerous other filmmakers, artists, academics, archivists, and fans. This one-of-a-kind project is essentially an archive of a “Who’s Who” of Black speculative fiction.