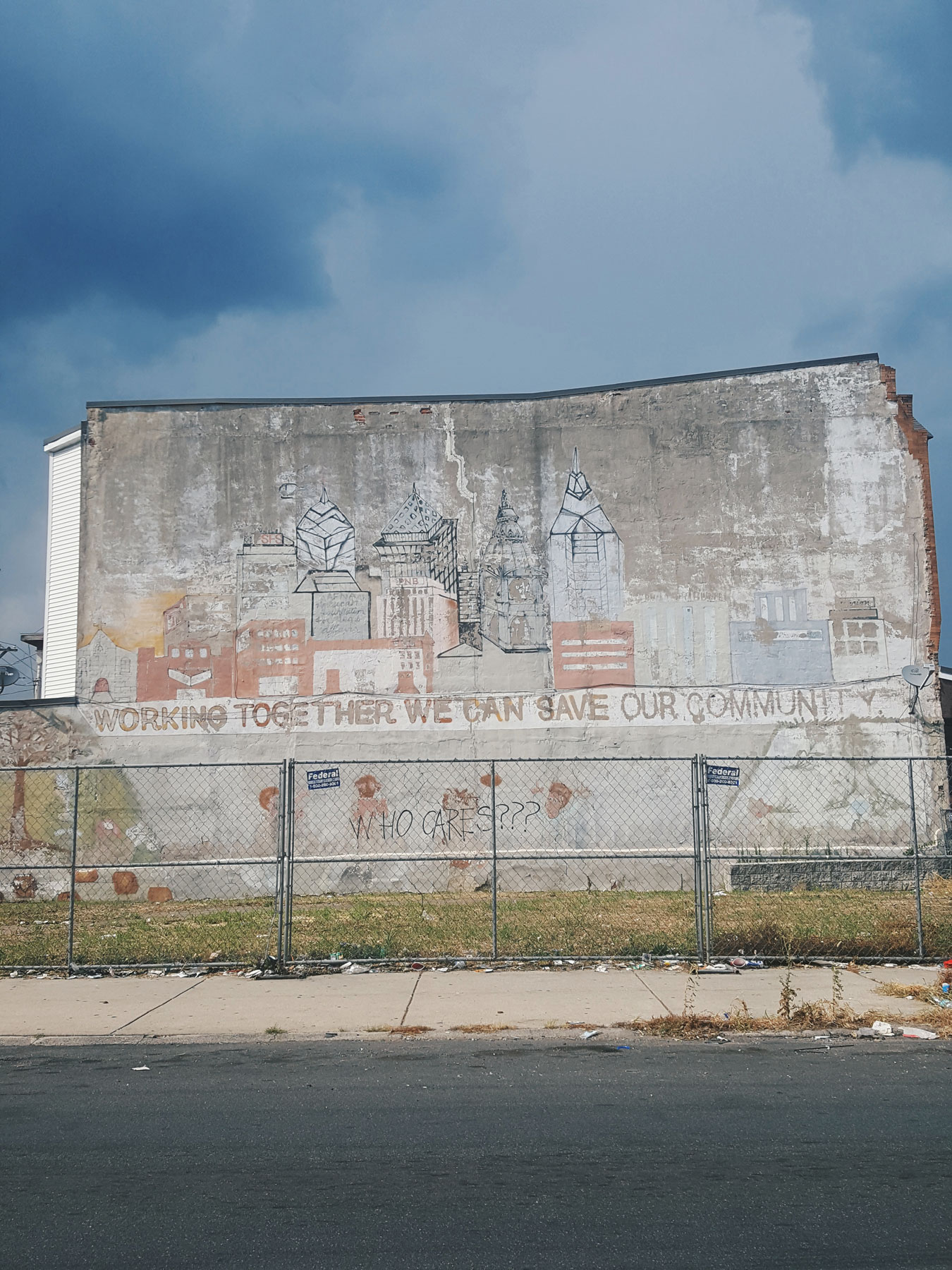 They built an ark for us, they said, ushered us in as a swelling mass of bodies, our flesh rent and curdled amongst others of our flesh, our brown flowing with blood and feces and made liquid. They said, an ark— for those of you who could make it across the habitat of dangerous amphibians, you’ll see mermaid husks, dried out impaled on the ruins of Atlantis, you’ll see a bright sustained, red sun peaking over the horizon, waves licked with foam; an ark that will carry you to lush, green new worlds, that will float across the sea.

Such were arks built for us.

It’s 8am and they are still raging. The clatter of the promise of the new world beating a strange arpeggio in rhythm to a riot. A grocery store cart on fire, lit by a stack of Alpha Flight comic books and worn mattresses; a dance on top of a mail truck, buildings— once towers that housed telemarketers and people eating salad on their lunch break, towers that served as a safe, comforting space— a cocoon— for law makers and bill collectors— rain sheets of glass, the windows sliding off these wonders of architecture in a glorious cascade. And of the bill collectors themselves? Without their vast halls, there is nothing for them. They pirouette vulnerably in the city center, kneeling on the stoops of the monuments they themselves once guarded— at least ideologically— in more prosperous times— times that, at least for them, lacked uncertainty. Now, they are led by their ties like chattel, by masked women carrying shotguns and cattle prods, some adorned with the swaddled, breast-wrapped body of a baby. Someone’s made a tank out of rusting Whole Food’s dumpsters, affixed a pneumatic pump-triggered launcher and armed it with Molotov cocktails made from discarded Belgian import beer bottles.

Someone’s made a throne out of a bunch of milkcrates and cardboard boxes. Sitting on the throne is a woman who, a week ago, was begging for change in front of the Comcast building. Her sign reads “Will write think piece for food”. Her skin is black. She is wearing crystal and spiked Christian Louboutin heels. They worship her; she may not be a goddess but at least, for now, she is the king.

A vinyl sign floats by in the quickly whipping wind. “JUSTICE!” it reads, though I can’t make out who for; surely, it was any one of the unarmed men killed a few months ago by police. I squint to make it out, but the horizon takes it, and all I can think about is how much that sign had to cost with FedEx/Kinko’s rising printing rates, and it’s at least 10 feet long and two colors and there’s pictures. This isn’t a riot, though, this is the promise of the ark; this is the new wonderland that they gave us, made real. The wonderland we dreamed up when we ate sugar sandwiches and flicked roaches off the kitchen table; the wonderland that danced in our subconscious when we bent coat hangers into antennae and patched up our couches with duct tape. Or at least, this is the beginning, the dawn, the spark.

“Look, we didn’t ask for it,” I told him. A round of shots burst outside of our window. I peak out. A pay telephone is finding itself launched into a Korean corner store. “We did everything right. We walked down the streets, en masse, with our hands up. We held our bus passes aloft, wore gray clothing, tied our shoes, pulled our pants up. We were totally complicit. We tried it.”

He sits on the edge of the bed in our crumbling room in our crumbling row home. He is hunched over and crying and afraid. I walk away from the window over to him and touch his skin, gingerly, rub my brown fingers into his mealy, white hands as I have done hundreds of times before. He looks back at me with those soft eyes. I can’t help but stare into them. They are deep wells. I’m reminded when we first met, on some queer dating app, probably BearHunter or Masc4Masc, when everyone had smart phones and the world was navigable by finger touch, when autonomy seemed to float down like consciousness on a stream— the ark.

The seeds were planted then, we just couldn’t see it. We slowly let a few politicians step out of darkness and into the glorious light of an MSNBC news van. We gave them the spotlight with our reblogs and our “LOLs” and so those politicians joined up with their best buds, the corporations, and the real world— planet earth, burgeoning apiary wrought with oak and diamonds in ravenous salty lake, a sphere suspended in space in real life— became the stage where real live human beings, black ones, became the bargaining chips for electoral campaign residue. Mayors, state senators, presidents, comptrollers. The zealots slipped into the seams of the system, soon outnumbering the even tempered and mild mannered, the would-be people’s politicians, still careerists all, who sat back eating grapes and getting their feet washed while the world turned to ash, who never spoke up or got angry for fear of losing an election, for fear of losing their already spine-wilted constituency.

I tear myself away from his gaze; I must be strong, can’t handle his crying, and I go into a stack of papers. I read with a rasp choking on barbed saliva; trembling: “And thereby granting executive power to any law enforcement agency under any circumstances in instances of perceived criminality wherein the property or personhood of other persons, including incorporated entities, are threatened. Unless the assailant is showing extreme complicity, all executive actions undertaken by law enforcement on behalf of said property or persons, including incorporated entities, will be upheld and protected by writ of federal law.” And it’s too much for him. He falls into a ball on the floor, crying, tearing at the paper. I go to lift him up. I remember how we all made our way then; we didn’t rebel, we just walked with our eyes lowered and our hands constantly up, we stopped carrying devices that looked like guns— cell phones, pencils, packs of incense. We stopped laughing in public theaters, stopped trying to apply for jobs we knew we were qualified for— lawyer, stenographer, nursing floor manager, comic book writer— and we shuffled, thinned out the timbre of our voices and cut the auxiliary cords on the stereos in the faded brown Fords we drove to and from work. A mass of black skin in gray suits, heaving, respectable, settling into our seats, entering buildings with our backpacks already opened, spread eagle and waiting patiently while all others feasted. And yeah, there were so-called allies, white men and women who marched through the city with their hands up too. They coasted, hands up and bright orange rubber messenger bags swinging in the neon kissed afternoon, all in solidarity they said, on their way to their 9 to 5s, on their commutes to the hipster coffee shop/bean bag emporium. Some even wore our pale gray suits; post-modern Patty Hearsts clip-clopping down hallways on their way to turn off our lights. Eventually, we faded out of fashion from over-saturation; gray suits lined the racks at Urban Outfitters sharing shelf-space with hot pink keffiyeh scarves and Che Guevara t-shirts.

But one of us, then another of us, and another, were killed; perhaps we took too long to get our train tickets ready for the conductor? Perhaps after a long shift at the diner we gave a little sass to an overly aggressive customer? Perhaps we jaywalked ahead of the yellow light, jogging across the street as cars rolled to a stop, a momentary pause in genuflecting, suspended in traffic like a moth in amber. In that very moment, before our death, we are in control, fully free. (and of the ark?)

Now, the streets are alive with fire. Everything is burning. The night before, I lay swept in his thick heavy arms, cradled by him, asleep in his wonderful weight. We lit a candle and let our awkward playlist simmer: Godspeed You Black Emperor, Daft Punk, FKA Twigs, Moor Mother Goddess, Barry Manilow, Art Ensemble of Chicago; those old songs, before everything was digitized, approved, and kept behind gates, music from the time when album covers had artwork, when albums had covers, when albums… We talked in hushed tones about what all these killings meant. I was blunt with him. It wasn’t enough that the love we shared was the most forbidden kind. We had to work towards something. He let out a sigh. He usually let me do the talking and that night was no different. He just sighed and squeezed me harder, as if he were trying to get inside of my skin to get to my heart. He kissed my forehead and fell asleep.

I lift him up, my knees wobbling, the roar of footsteps outside of our door, the smash and clatter of a falling dynasty in our hallway. Some body thrusts against our door maniacally. The rage of centuries on the ark, centuries on the slave block, centuries traipsing through the social assistance lines is tearing at the fabric of our reality and the only thing that is stopping it from ripping is the shoddy masonry I’d sent a polite letter to our landlord about, two hinges that have been WD-40’d into a new shade of rust.

The door crashes into shards.

At least twenty men stand before us. I thought their eyes would be aflame, skin caked in blood. They are not. They are haggard, yes, a dark conglomerate of beings barely shifting in the dust strewn light. They have machetes and guns and vacuum hoses and X-Box controllers wrapped up as nunchaku. Some are carrying Ziplock bags of blond hair, others have necklaces of white thumbs, some are wearing Burberry scarves and Tom Ford ascots like equal symbols of warrior-hood. They look at my partner and snarl. They lunge forward, grabbing at our limbs. A loud bang, sharp and deliberate. Am I hit? Is he? I sink to my knees, slipping out of his hands and the sea of men parts before us. A woman appears. She is short, squatty, cherubic and carrying a bop gun made of springs, hydraulic pumps and canola oil, firing nails and bobby pins; her satchel tucked at her breast filled with sage ash. Her hair is a tangled mesh of dreads, her ears pierced with a wooden ankh. A burst of dusty street lamp light refracts wildly off of her crystal Louboutin heels. The men slowly pile out of the room, then tear back out into the streets, ahowl.

The night is fresh and suddenly clear. The short woman with the dreads smells sweetly of ozone. She lowers her weapon, inspects the room and leaves. I watch from the window as she ambles up the street. Occasionally she fires her weapon, controlled bursts in the air, disappearing down the avenue, covered under a swirl of trash, lost amidst the wails, guiding flaming motorcycles into the pharmacy, pulling Asian children out of the rubble, safe guarding the rest of the world from the death throes of revenge. I don’t know her, but at that moment I’m sure that’s all she’s ever done, on the ark, in the swamps by the master’s house, at funerals for drug dealers, on the internet, and in the streets, begging for change on the steps of the place where she once wrote elegiac think-pieces every time one of us died. I rub my fingers through my boyfriend’s shaggy brown hair, down across his chubby cheeks and think, yes, she still does this guarding now, in the promised and pristine garden of the wonderland.