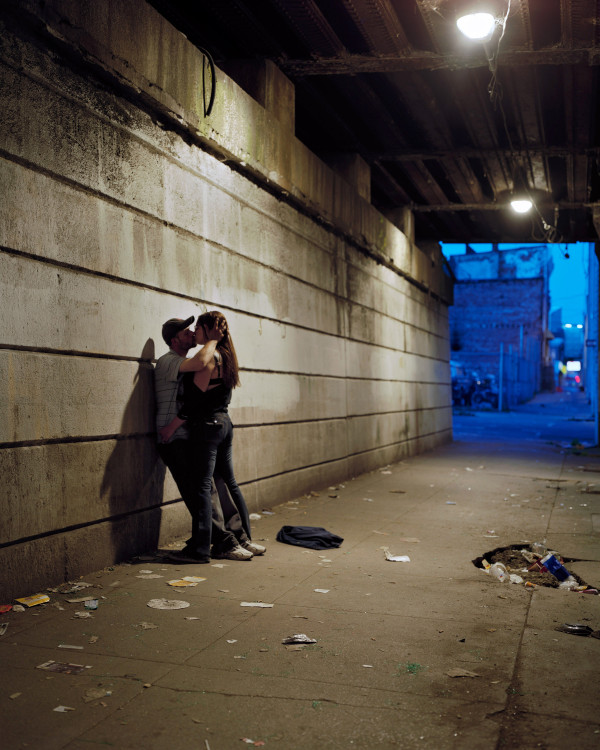 Under these streets, under these, under the train tracks, the shit that goes on in the woods, the shit that goes on while this train is driving by above our heads, the things that go on, on these streets at night when the lights go off, are the kind of things that, that, that people can only dream about, that people can only, it just amazes, it would amaze a normal person, it, it would, it would totally amaze a normal person. Me, myself, like I came down on the train and I got stuck and I been here for 10 years. 10 years I been down here.

The passage above reads like something from a dystopian comic book. Instead, it’s real life under the El along Kensington Ave here in Philly.

If you don’t live by the El in North Philly or if you don’t ride SEPTA outside of Center City, you probably only hear about what goes on under the El when Action News decides to run a passing blurb about some brutal drug-related event where they show a clip of cop cars at night flashing the red and blue. We don’t hear about the history of economics, the lacking access to resources, post-industrial blight and poverty, the relationships between those events and subsequent drug addiction and violence, and least of all, the people living these realities.

Meanwhile graphic novel after television series after movie comes out depicting brutally violent dystopian post-apocalypses, cyberpunk fictions of complete corporate takeover and total abandonment of The People for The Riches (Governor Corbett, are you there?), the destruction of the environment for terminally capitalistic surveillance states, the scramble for humanity to survive in the zombie apocalypse. . .

Jeffrey Stockbridge shows his chronicle of the living through an ongoing release of photography, audio, and interviews. By his media we get a straightforward glimpse of daily life for those who have not much else available to them but what they can hustle that day. In his own words:

Kensington Blues focuses on the men, women and children who live along Kensington Ave in North Philadelphia. Shadowed by an elevated train, known as the El, the Ave runs approx 3 miles into North East Philly. Under the El, drug use and prostitution are widespread. Many residents are caught in a loosing battle with their drug addiction and live day-to-day to supply their habit and avoid dope-sickness. This drama unfolds every day on the Ave as if it were a stage and the rush of El train above, its curtain. Using photography, audio recordings and journal entries my work explores the state of mind of those who struggle to survive the neighborhood and themselves. By utilizing first person story telling, my goal is to tap into the hearts and minds of my subjects and viewers equally, drawing forth the human condition and encouraging compassion for one another despite the vast differences between us.

It’s been a minute now since there’s been a project that doesn’t just photograph the lives of poor, unfortunate souls for us better-off folks to voyeuristically remark upon––Kensington Blues goes to the great trouble of interviewing people. And I say great trouble because getting people to talk to you about their personal experiences, spending time with them while they write it down, transcribing tape recordings––all that takes time. And in our society today, the adage “time is money” prevents a huge majority of us from doing work like this, even empathizing with work like this.

It should certainly be said that Kensington Blues largely depicts white people. Perhaps that is the result of the artist’s own skin tone and cultural race identity (or appearance thereof), and his subsequent ability to approach willing subjects. Perhaps it’s what you get in old European emigrated working class neighborhoods after the decline of industry in a white supremacist country (where crimes against brown people are routinely devalued and ignored while crimes against white people receive attention and action). Either way, Kensington Blues is real. Sci-fi and speculative fiction often depict dark futures where survivors are abandoned to their own devices, but so do projects like these. In fiction, we’re invited to imagine ways out of these desolate premonitions. What do we do about reality?

Read and listen to first-person stories and see photographs of Kensington Blues at length here. Or check out more from Jeffrey Stockbridge at his professional website here.