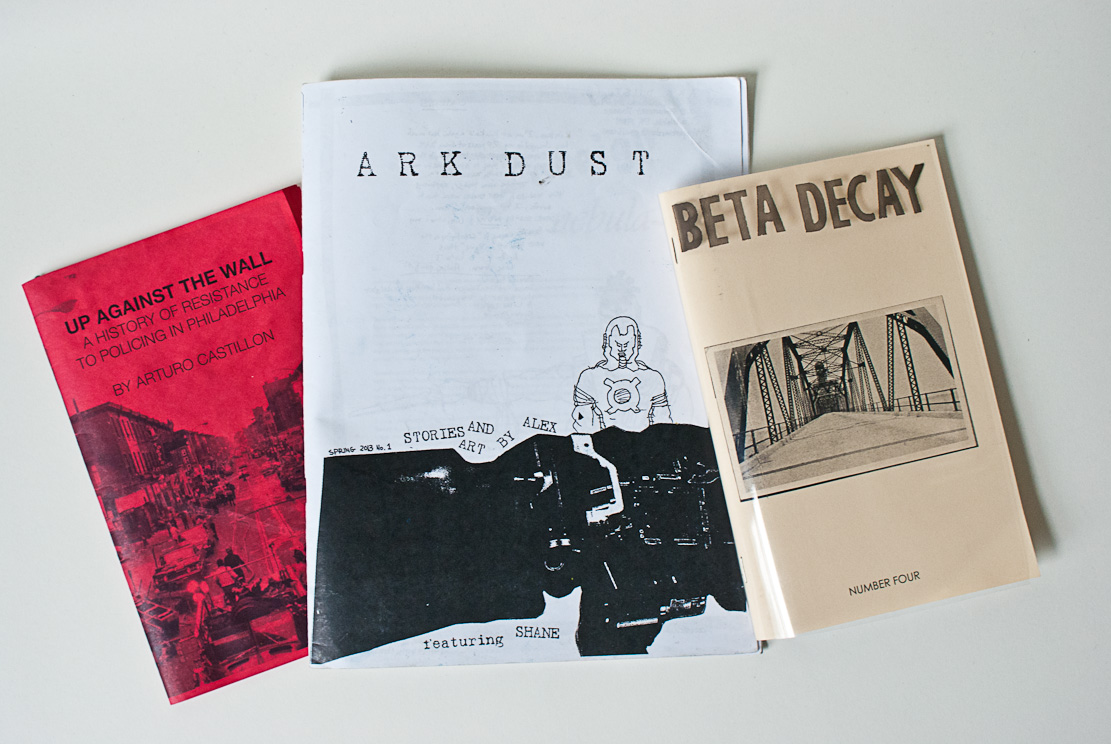 Media Blackout: Game one of our media review series

WELCOME TO MEDIA BLACKOUT, WHERE WE REVIEW THE ZINES & OTHER MEDIA CLUTTERING UP OUR BAGS AND BEDSIDES. GAME ONE FEATURES THREE REVIEWS. LET’S GET IT ON!

Alex writes fiction that reads like an absurd reality show super hero comic with the emotional weight of the last really good movie you saw, combined with total “crazier things have happened” subway riding plausibility. Ever since starting the queer sci-fi/fantasy reading series, Laser Life, we’ve all begged and begged Alex for some take-home print form of the arresting stories he would diplomatically drop on us lowly commoners. So when he announced he would be making a zine to debut at the April 2013 Laser Life, we all counted our pocket change and patiently held our breath till the appointed day.

A R K D U S T is a fangirl dream. It contains five short stories by Alex, plus an excellent bonus story and interview from his partner, Shane Jenkins of Razed By Wolves, another mainstay of Laser Life, whose stories touch on the surreal fantasy vapors that always start to creep up from behind our spines when watching Princess Mononoke alone in the dark. All this in an old-school Kinkos xerox 8.5″ x 11″ format!

“Wow. Wow, really? Look, Wondra could snap your wanna be Ricky Martin ass in half and mail your spleen to Hook if she wanted to, so why not keep all the “bitch” comments tucked away into that turd brain of yours. I mean seriously, you’re the shittiest stool pigeon ever, how do you even find out any of this underworld shit you’re always reporting to Hook with as high a profile as you keep? I feel like Hook’s just too lazy to use Google on any one of his many goddamn smartphones because your information can’t be too insider. Like, every fucking wanna-be carjacker and armed insurrectionist knows who you are!” – A Little Light

The air outside was crisper, a refreshing spray of April breeze tickling at his flesh. He pulled his Harrington jacket a little tighter. The street was alive with drag queens and leather daddies and kids voguing in knock-off Yves St. Laurent, punks with spikey pink hair and Camaros with their trunks rattling under the weight of anthemic bass. Henry kept his eyes trained on the misshapen sidewalk, at the crack vials and used condom wrappers crackling under his Doc Martens. He was busy thinking about nothing, letting the wild night’s conversations slip over and through him, so much so that he’d walked a bit past his bus stop and had turned to go back when he saw the boy of velvet standing in front of TRINITY, under an awning, patting his pockets, shaking nervously, his muscles rippling out of his thin green shirt. He looked like a shadow. When the boy found his pack of cigarettes, the boy cursed to himself that he’d lost his lighter. A kind of ghostly sadness crept over Henry when he saw the boy standing there without a light, and this sadness grew as he watched wave after wave of clubgoers pass the boy, and though the boy’d ask, none of them had a light for him. Henry quickly patter himself, but remembered he’d stopped smoking a year ago. – Clones

Get a copy of A R K D U S T by contacting Alex at theyarebirds @ gmail. com or follow Alex’s new queer superhero tumblr, the A\terv3/rz3.

Maybe it’s because I started to read Beta Decay #4 while luxuriating on my roof in the hot Philly sun, but the short fiction pieces inside Andrew’s zine remind me of all the random pulp novels I used to bring with me on the week-long family vacation down the shore. Except stranger and more ominous, and neatly within the treatment one could imagine given to summer Hollywood movie releases, but the kind you leave the theater feeling strangely bereft and wondering if a milkshake at the diner after is really going to bring you back to earth. Beta Decay #4’s assortment of unrelated(?) short stories gives the reader glimpses of the incomprehensible world as it reveals itself to mundane human perception. Shit is creepy yo (but I’m not trying to spoil it here!).

Frances closed her eyes. Her mind pulled out from the building, out from the town, out from the metropolitan agglomeration, out from the continents and sea and hemisphere, out of the earth completely. Against the deep black, she saw the planet as a red, pulsing dot, emitting a see of radio waves, microwaves, gamma rays, a nearly infinite spectrum.

Spread out before Jeremiah was a monolith of coral, splashes of orange and red and yellow. Jeremiah always thought someday he would be able to make out patterns, that after a while, he’d be able to understand the exact way that the organisms grew and deviated from geometrical perfection, but this information had eluded him ever since he was a boy pouring over the dusty picturebooks on his mother’s shelf

UP AGAINST THE WALL: A History of Resistance to Policing in Philadelphia by Arturo Castillion

I picked up this zine while at a punk/noise/thrash? show at LAVA Space in West Philly, an autonomous organizing space on Lancaster Ave. (Ever since this new show organizer, Zu, rolled up to town there’s been a #brosfallback no racist/colonialist/misogynist/phobic bullshit atmosphere at their shows that’s been a breath of fresh air, especially for someone that stopped going to shows because they were full of violent man babies. Another novel aspect of the shows they organize is the provision for zines & hang-out discussion space, which is embarrassing to find novel because it should be normal if we’re having radical bands play radical spaces. ¬__¬;) Anyway, Arturo was there, and intrigued that someone had made a zine summarizing local black resistance to police, I bought a copy.

This zine is essentially an academic-feeling summary of racism and power relations surrounding the Philadelphia police, its formation, and how the black communities being terrorized by them resisted in the forms of mass uprisings. Appropriately, it feels like reading from a history text book from middle school, and is easy to digest. And similar to most every classroom history textbook, its author provides no personal bio or reasoning for compiling this particular history of resistance. So while it’s very intriguing and useful to read about black Philly resistance to cops, I couldn’t help but feel displaced by the bodiless and unsituated voice of the narrator (despite having shook their hand!).

In Our Enemies in Blue: Police and Power in America Kristian Williams describes how policing has historically functioned to enforce a white dominated racial order. In the city once the nation’s capital, the predecessor of the modern day Philadelphia police was the civilian-run “night watch,” which monitored the populace from the time of the early eighteenth century. The watch, which developed in Boston as well, was the Northern equivalent of the Southern slave patrols. In 1837 the mayor of Philadelphia declared, “Every colored person found in the street after (the posting of) watch should be closely supervised by the officers of the night.” Whether it was the night watch or the slave patrol, the white population as whole was expected to police black people.

The introduction of the first black officers reflected the growing size of the black population. In the Philadelphia Negro W.E.B. Dubois described how in 1884 Mayor Samuel G. King appointed the first sixty black officers to the police department, a move that was opposed by whites. These police were put on duty exclusively in black neighborhoods and only permitted to arrest black people. Dubois also noted that none of the original black policemen would ever receive any promotions. Thus, the incorporation of black police was not a sign of racial progress, but instead a means to control the rising black populous.

Despite the voice behind the curtain vibe, the zine served as a solid reminder that many other histories and conflicts have occurred in this city. It compiles historical facts to demonstrate just how real and tangible white supremacy and racist power dynamics are and how they contributed to the current status quo. What I found most useful and intriguing were the recounts of several street incidents throughout the 50s and 60s where police beatings & other open abuses of power were confronted and stopped by suddenly forming crowds of black Philadelphians. It closes by summarizing the actual tactics and methods used to confront police violence, namely that there is power in quickly gathering groups of people. Useful to read if only to remember, since those in power would love to have us forget. . .

You can probably get your own copy of this and Arturo’s other police resistance zines at LAVA Space shows and Wooden Shoe books, or you can definitely read an updated text-only version of it here.