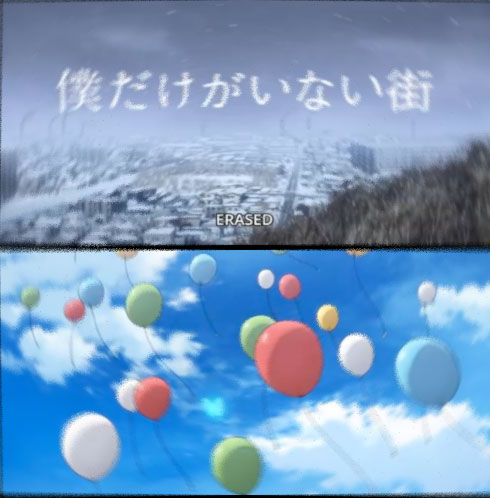 The Town Without Me / finally some anime

AS ALL DEDICATED & WELL-VERSED ANIME FANS KNOW, THE MULTI-GENRE MEDIUM FROM JAPAN IS AS RICH AND VARIED IN PHILOSOPHICALLY EXPERIMENTAL NARRATIVE AND SPECULATIVE UNIVERSE AS THE MOST HIGHLY-TOUTED LITERARY & FILM TRASH BELOVED BY HIGH ART SNOBS THE WORLD OVER. JUST KIDDING. WE CAME UP ON ANIME AND JUST WANNA SHARE WHAT’S GOOD. THERE’S MORE TO BOOKS, YOU KNOW.

If you haven’t already, eventually, you will have a moment in your life where you wish you could go back and change something. Time travel fiction is largely connected to this concept. Whether it’s going back in time to stop the assassination of JFK [11.22.63] or going back just to get an “A” on a history project [Bill & Ted] the point remains that changing time can potentially have grave consequences. In the anime we are reviewing today, these concepts are explored in a rather vague manner to help guide you toward an anime you might like. This is Metropolarity’s, no spoilers beyond episode 1, anime reviews. The anime we are exploring today is called Boku dake ga Inai Machi (the town without me/ the town where only I am missing) aka Erased.

Plot: Our main character, Satoru Fujinuma, is a 29 year old burnout who works as a pizza delivery guy while aspiring to make a career as manga artist. However publishers are unwilling to buy into his ideas because they seem to lack a missing element, pushing him to seemingly give up this dream. We soon learn his life of passive regrets is juxtaposed with a unique ability called revival. Revival, which often is coupled with the appearance of a blue butterfly, is a form of déjà vu in which a keen observer is given a chance to find something wrong or bad and then alter it before tragedy strikes.

However when Satoru gets involved he seems to break even or something bad seems to befall him. When this happens in the first episode his mother comes to take care of him, and the story quickly spirals out of control from there.

Why you might like it: If you’ve ever managed to sit through special victims unit marathons, criminal minds episodes, or even case closed/detective conan this is right up your alley. Erased shares quite a few similarities with case closed: solving a mystery, boy investigator, plucky companions who may or may not know more. However their stark differences help Erased feel more grounded, Satoru has no gadgets that help him defeat his foes. He is cunning, but ultimately just a powerless boy, who must sway the adults around him to use their abilities to bring about real change. Also at being only 12 episodes it’s a show that doesn’t require an extended commitment, and it produces a slow burn that allows the mystery to flesh itself out. Additionally the show is slightly more enjoyable the second time around, as you can notice things you may have missed the first time.

Why you might hate it: The details are scant at times, without well rounded explanations of everyone’s motivations, which may leave some viewers wanting more. Additionally the show suffers from “sixth sense syndrome”, its good and you can enjoy it a second time, but it doesn’t really have moments that one would want to re-watch again and again. While the pacing felt good for the majority of the show, the last few episodes do feel quite jerky [slow, fast, slow]. This is compounded by not being totally privy to the actions of Satoru within the climax which can leave viewers slightly confused, as all of this deviates from viewers being in his mind/thoughts the whole time and only done to deepen the dramatic effect in the finally; But it doesn’t really, and the whole “Light Yagami-inspired” wrap up feels a little weaker for it.

Why it matters: Like the theme song “Re:Re:” implies Satoru is given another chance and while the rules surrounding this chance are fantasy based and sketchy at times, it should resonate with most viewers. As many of us, like Satoru could use a second chance even if it’s only to make a small change, and even if it would put one at risk. The show manages to argue for synchronicity [Mulder] and causation [Scully] which leave Erased in an amicable no fail zone. The balance is refreshing outlook from the standard “grab life by the horns or die” message of many anime before it. As we all are a result of both shit happening and your actions and while you should work to change what you can; you shouldn’t linger on failure brought about from what you can’t. The heart of Erased shines through its emotional conveyance of the importance of relationships (family, friends, mentors, ect). This is bolstered by a central theme of as “long as you try your best, you can never fail” and dialog that keeps viewers both entertained and engaged on a dime.

Content Warnings: Show is v engrossing n we like it a lot but subject matter is heavy – shows a graphic murder & a lot of the story revolves around a child predator, which can get stressful/triggering. We would say that the content isn’t callously deployed as a gratuitous plot device, though, and that’s why we fux with Erased. [-Eighteen]