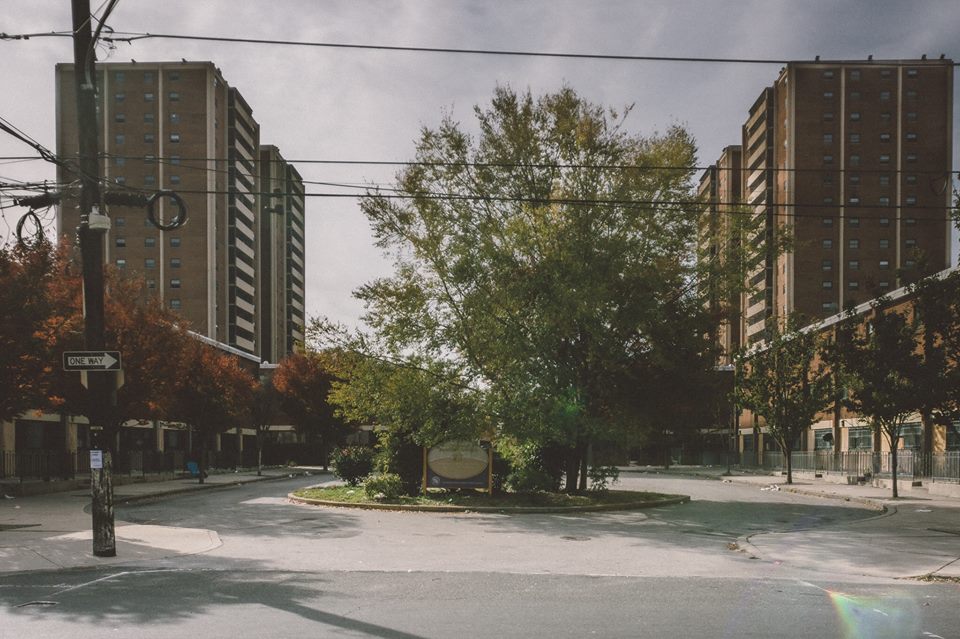 “Community Futurisms: Time & Memory in North Philly” is a social practice, collaborative art, and ethnographic research project exploring oral histories, memories, alternative temporalities, and futures within the North Philadelphia neighborhood known as Sharswood/Blumberg. The area is currently undergoing a major redevelopment project after years of deep poverty, educational inequality, and high crime. “Community Futurisms” will document the redevelopment of Sharswood/Blumberg, through an multidisciplinary community art project that explores the intersections of futurism, literature, visual remixing, sound, and activism as art.

The goal of the Community Futures Lab is to collect, preserve, and share the Sharswood-Blumberg community’s memories and stories for future generations. We are looking for anyone who has ever lived in the neighborhood, and people who still live in the neighborhood and surrounding areas.

A project of The AfroFuturist Affair/Black Quantum Futurism Collective, supported in large part by A Blade of Grass
http://www.abladeofgrass.org/fellow/black-quantum-futurism/
BQF Collective is inspired by afrofuturism, quantum physics, and african traditions of spatial-temporal consciousness. They weave science fiction realities with african concepts of time, ritual and sound to present innovative works that offer practical ways to escape time loops, oppression vortexes and the digital matrix.

Black Quantum Futurism (BQF), along with the AfroFuturist Affair, both activist-oriented collectives celebrating and disseminating black science fiction culture, has opened a community resource space envisioned as a “time capsule” in Sharswood/Blumberg. The North Philly neighborhood has seen much socioeconomic strife over the years and is now undergoing a $526 million dollar redevelopment project that cleared thousands of residential units via eminent domain. The Community Futures Lab was created in response to this reality and is also asking the neighborhood what potential needs the lab can fulfill, from organizing housing resources workshops and skill-sharing panels to zine brunches and yoga classes. Located next to Temple University, the blocks around the lab are tempting land grabs for thirsty real estate developers — in this case, the Philadelphia Housing Authority — who want to wipe the slate clean of the poverty and inequality that have long plagued the area. But the city neglects to consider the chaos that the displacement of human beings and communities causes to the residents who are uprooted. Personal stakes are ignored and buried under the rubble in the name of profitability.

Black Quantum Futurism encompasses the work of the lawyer-activist-writer Rasheedah Phillips and musician-designer-photographer Camae Ayewa, as well as the efforts of others who have collaborated with the two artists. Phillips is the founder of the AfroFuturist Affair and published the Black Quantum Futurism manifesto, which proposes a creative and critical vision that values and rewrites black diasporic history through an Afrofuturist lens. She has participated in The Shadows Took Shape, the group exhibition at the Studio Museum in Harlem that explored Afrofuturist aesthetics, as well as the yearlong Octavia Butler celebration at Clockshop in Los Angeles. Ayewa performs and tours as Moor Mother, a solo music project creating memorial soundscapes and what she calls “slaveship punk,” and cofounded Rockers! Philly, a festival devoted to marginalized artists.

In addition to her artistic practice, Phillips is the managing attorney for the Community Legal Services of Philadelphia, which ties her intimately to the concerns of locals who are left helpless in the state of the current housing crisis. She also attended Temple University for both her BA and JD, and has lived about 10 blocks from Community Futures Lab for the last six years. Phillips says, “utilize me,” and wants her neighbors to know that she has a stake in Sharswood/Blumsberg and intends to facilitate change through civic engagement.

CFL has only been open a couple months and has already hosted mulllltiple events and received as many press write-ups. We’ll try to crosspost CFL events here, but the best way to keep up with what’s going on at the Lab is to follow them:::::

THE PRESS SO FAR….

HUFFPOST POLITICS LIVE | Rasheedah Phillips tells the truth about gentrification and displacement in Philadelphia, the site of the Democratic convention. | 26 JULY 2016

So yeah yo, follow @communityfutureslab on Facebook, Instagram, Tumblr, and if you want to stay abreast of Rasheedah’s many projects, events, and appearances in general, we definitely recommend subscribing to her FUTURE LIGHT CONE newsletter here.