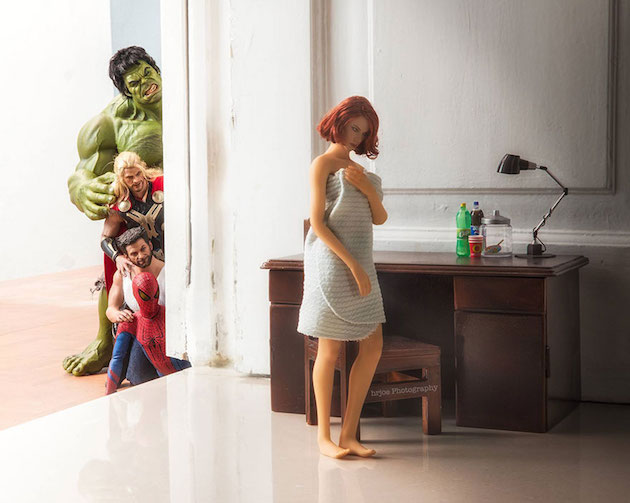 Why I Kinda, Sorta Don’t Really Totally Love the Edy Hardjo’s “The Secret Life of Super-Heroes” or Whatever

Did you know? Alex has written most of our event descriptions, and perhaps famously, our HERALD. We like his reviews too.

And suddenly, my Facebook wall is inundated with the strange, twisted images of super-hero mego toys pouring hot cooking oil on top of each other, bare-assed pissing on the sides of buildings and sneaking obvious peeks at each others junk, or, innocuously enough, doing their fucking laundry. And by inundated I mean like, 3 people, but still that’s a lot, especially in this day and age when every tag is a reminder that something dumb, regretful, or over-analyzed is happening, and it’s all unfolding on your precious, precious wall. But it’s not just the irksome practice of the, “oh, let me tag everyone I think might be kinda down with this” (it’s not that irksome and kind of sweet, actually… aw, you’re thinking of me! Thanks, assorted boos!) as much as it is the sort of sad reality that folks not into your particular niche of nerdom just fucking don’t get it, maaaaan!

In this particular case, the gangs all here: Spider-Man, Thor, Batman. It’s a veritable who’s who of mainstream superdom, all of them blistering with sinewy plastic model toy muscles and precisely carved renditions of their respective actor’s chiseled, handsome faces. It’s just that in “Superheroes in Real Life” by Edy Hardjo (or whatever it’s called), the point of parody seems to be uncomfortably off the mark.

Let me explain. I don’t think super-heroes are beyond reproach. In fact, the idea of the super-hero, and the universes they inhabit, with peril at every turn and with it’s strange and fantastical burst of science fiction whimsy, is in and of itself, a parody. It’s a playful rendering of the idea of stoic leadership in the face of inscrutable demands of every day life. Many writers have played within the seams of this concept– hyperreality married with nuke weilding, dragonlaced, alien mutant imbued fantasy. I mean, the first superhero ever, Superman, was an avatar that deftly embodied everything we, the struggling masses, seemed to ceaselessly endure: poverty, abuse, restriction and corruption by power. And through the lens of the super-hero– a fantastic, satirical take on modernity and it’s flawed relationship with our humanity– generations have been able to eke out a vision of the world they’d rather see. So, to me, blatant, unnuanced mockeries of super-heroes miss the mark, painfully.

Is the attempt at satire in Hardjo’s work about the juxtapositioning? Is it an homage to the wonders of play, of the pre-pubescent mind discovering itself? Does it work as an attempt at uncovering mainstream comic movies lack of gender and sexual orientation equality while perpetuating a staid stereotype of uber-masculinity? It’s unclear. I can concede an interest in the work can be made more prescient if the attempt is to satirize the mostly unfun movie universes; those are mainly fascist junk, the modern day take on Rambo and Diehard, and they clearly deserve to be skewered. But since there’s so much ingrained and intrinsic to the characters from the source material– the comics themselves– it becomes dangerously close to pedantic nihilism, cutting and mean spirited for the sake of it’s own self. In short, the comic books are already parodying themselves, playfully and with genuine fervor. In DAREDEVIL, the main character has “come out of the closet” as a superhero, and his everyday life has flipped in many bizarre ways because of it. MULTIVERSITY, penned by legendary meta-fiction writer Grant Morisson, is tackling the exact things I think Hardjo is trying to make light of. It’s a series featuring multiple universes, where sometimes Batman is an infant robot, where talking Tigers leap from the page (quite literally), and each universe exist in the other universes, but only in the form of a comic book! In SHE-HULK, the titular heroine’s adventures come mostly from her desperately clinging to an unusual law firm she’s started as a result of not wanting to carry on as a corporate stooge– imagine a 7 foot tall green superhero showing up in court to defend Dr. Doom’s son; yes, dearlings, hijinks ensue. And this is to say nothing of the constant fourth wall demolishing in DEADPOOL, or the sublimely hysterical, yet still heartfelt and genuine character study taking place in SINISTER SIX, where b-list villains are center stage as they navigate their way through the wonders of the Marvel Universe.

“The Secret Life of Super-heroes” (or whatever it’s fucking called!) is interesting visually. It’s definitely fun to see Spider-Man and his amazing friends taking a selfie while the Hulk tries to peel a xenomorph off of his face. But I think this exhibit is more “Meet the Feebles” than it is “Galaxyquest”. Where the former is an unnecessary, vicious send-up by an outsider trying to shock, essentially parodying a parody (the Muppets), the latter is a sweet, endearing piece of satire that stands on it’s own, with a burgeoning narrative and a willingness to admit that there is power and the ability to dream, dare, and do within the source material (Star Trek). Frankly, if one were to read an actual super hero comic– any one of them– they’d see that the everyday lives of superheros (where Batgirl is constantly losing and checking her phone, riding the subway to school and hanging out with her weird as fuck friends) aren’t so secret after all.

Thanks Alex. You can see more photos from the series in question here on HiConsumption.com. Our cover image is directly pulled from the same place.